The Grapefruit Cup is is a fun race series that happens weekly throughout the winter. The races include time trails, mass start races, head to head races, and more. The series is designed to be fun and is based on a percentage points away from the winners time. Athletes young and old are encouraged to participate in the Grapefruit cup series or even just register for one race.

The race series typically happens on Tuesday nights with races happening at Wildwood, Holiday Park, or Kinsmen Park. Day to day communication happens via Facebook. Please follow the page to get detailed updates. You can view or download the Grapefruit cup race guide here. 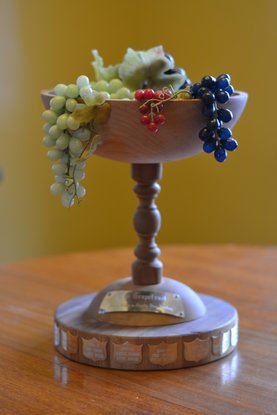 The original intent of the series was to award the top male and female Saskatoon Nordic Ski Club members who consistently performed near the top of the field. The time trials were always in mixed format, so female and male competitors raced each other, and points were awarded on finish position. A world cup scoring format was used whereby the top skier got a specific amount of points for being first, second place got another set amount of points, and so on down to 20th place where everyone after received one point.  At the end of the season, and all points were counted, the top male and female would have their names added to the Grapefruit trophy and, “be displayed in a Saskatoon Nordic Ski Club clubhouse for all to see“.  The series was meant to be open to all club members, fun in nature, and with half the races being serious time trials, and the other half being, “novel or innovative”.

Today we still hold true to the roots of excellence in Nordic time trialing but with a few mods. We have replaced the world cup scoring with a percentage of winner, points system. This was done to enable participants to gauge improvement against the overall winners, or even their “friendly” rival. Its always nice to see if you’ve gone from being at say 68% of the speedies, up to 78% of those same speedies.

We have gone away from strictly time trialing to a mix of individual and mass start events with the inclusion of a relay, a skiathlon, and of course everyone’s favorite, the Australian Pursuit. The Australian Pursuit is in the books, however, as having first been run on March 13th, 1985 – the first and only paper record of it being held.

Another element of the original series was, “The Grapefruit Challenge”. The challenge was based on time trialing over a fixed course and completing it in under a specified time. The challenge was defined as follows: “Any person is forthwith challenged to ski one full 2km loop of Kinsmen Park in less than 4 minutes 59 seconds from a standing [still] start”. This was a more serious challenge, as before anyone could be listed in the challenge register, their time needed to be certified by a club coach or official, the participant themselves, and one other witness.