The Saskatoon Blind and Visually Impaired Skiers is looking for new members!

No knowledge of cross country skiing is needed to join, simply a desire to be active and have fun.

This group of blind and visually impaired people of all ages meets once a week during fall and winter to cross country ski and socialize.  Starting each October, they walk weekly on the Meewasin Trail to condition, and once the snow arrives, ski at Kinsmen Park and Wildwood Golf Course. Each skier is paired with a sighted guide. The group meets on Saturday mornings from 10:00 to noon for one hour, followed with coffee and socializing. After the snow melts, weekly walks continue until the end of May

The Blind and Visually Impaired Skiers have several optional annual events, starting the season in October with a wiener roast and hike on a beautiful acreage near Grandora. A Christmas Ski and Potluck lunch is held at the same acreage in December. There is an overnight family weekend Ski and Soak in Watrous during the winter. Also the Club subsidizes members who wish to attend the Canadian Ski for Light recreational/competitive blind skiing event in different locations in Western Canada each February. The year is wound up with a catered supper and social at the CNIB in April.

The Saskatoon Blind and Visually Impaired Skiers have been in existence since 1978, and are affiliated with the Saskatoon Nordic Ski Club. It began with an idea from Herb Essenburg, who had fond memories of learning to ski with his brother when Herb was a vision-impaired child growing up in Winnipeg.  Herb remembered the fun he had and thought, why not give it a try as an adult? Herb and his friend, Jorgan Huss, began to ski together in the parks and golf courses in Saskatoon. They enjoyed themselves so much that they recruited other blind people and guides, and established the Saskatoon Blind Skiers.

The Club matches new skiers with volunteer guides to help them with transportation, walks and skiing. New skiers also receive assistance with obtaining skis, poles and boots. The Club promotes physical fitness as well as provides avenues for persons with disabilities to socialize with other skiers and their families.

If you would like more information about this project, either as a participant, instructor, or supporter, please contact: membership@saskatoonnordicski.ca 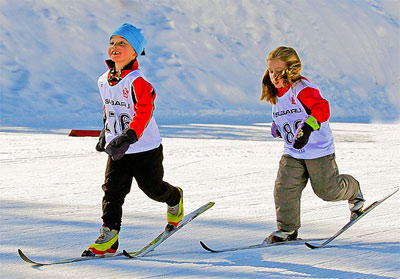